Coach Rick and Coach Cox had become close friends as they worked together. Rick was a bit younger and saw the athletes more as peers, but he still had a soft spot for the older man. He could tell he’d been struggling with his desires for the younger guys, not wanting to admit it or show his hand. But the young guys Coach Rick had been fucking had been spilling the beans about the older daddy’s extracurricular activitites.

Wanting to give the older man a chance to embrace his desires and not feel like he had to hide anything, he brought his new friend, Cameron, in to fuck him good. Cameron was a tall, lean stud with a massive cock and a passion for coach-fucking, which made him the perfect choice for Coach Cox.

When Cox came in, he was very aware that Rick and Cameron were all over each other. He didn’t know what to say, so he just sat down and asked why they wanted to see him. It wasn’t uncommon for a coach or player to want one-on-one time with him, but it was a little irregular for both to request a meeting.

Cox admired Cameron for sure, and he’d seen him a few times with his shirt and shorts off, just in a pair of socks and jock, a sight that inspired many heated masturbations. But having the chance to touch him and taste him, right then and there, with Coach Rick’s encouragement… it was like a dream come true.

Cameron dropped his shorts and pulled out his cock, letting its weight become apparent as it hung down between his legs. Coach Cox stared, practically hypnotized by his manhood, watching as it became full and engorged. Coach Rick took it in his hand, stroking it and getting the boy even more aroused while Cameron began to eye-fuck his older coach.

Cox was breathless, feeling his heart pound as his cock got hard watching his colleague feel up their young athlete. And when Coach Rick finally asked if he wanted to join in, Cox couldn’t say no.

Cameron smiled and removed his clothes before walking over to Coach Cox. The older man let out a desperate exhale as he tried to stay calm, seeing the big dick coming closer and closer to him. Timidly he reached out and touched it, feeling its thick girth and length in his grip. He opened his mouth, slowly taking it in, then exhaled again as he held it in his mouth.

It was exquisite. So big and powerful, full of vitality. He let it fill his mouth as he moaned on it. As he did, Coach Rick sat beside him, waiting his turn for the boy’s big, meaty cock. The two swapped back and forth, stroking their dicks as Cameron fed them his hard tool.

Coach Rick told Cox to bend over on the couch, directing his older partner to present his daddy ass to the young top. Coach Cox did as he was told, happy to relinquish his power to his buddy. Taking off his shorts and spreading his hole, he felt Cameron begin to tongue his delicate ass, making him moan with each enthusiastic lap of his tongue.

As soon as Cameron saw that Coach Cox was good and wet, the young stud stood up behind him and slid his cock between his cheeks. Cox felt the whistle swinging from his neck as Cameron began to enter him, pushing him forward as he gently pumped into his hole.

Coach Cox let out a deep moan as he felt the young top fill his ass, working his way in deeper and deeper. He looked to his partner, Rick, giving him an expression of thanks. Coach Rick smiled back at him, happy to do his buddy a solid, stroking his cock as he watched him get barebacked by their hot young stud. 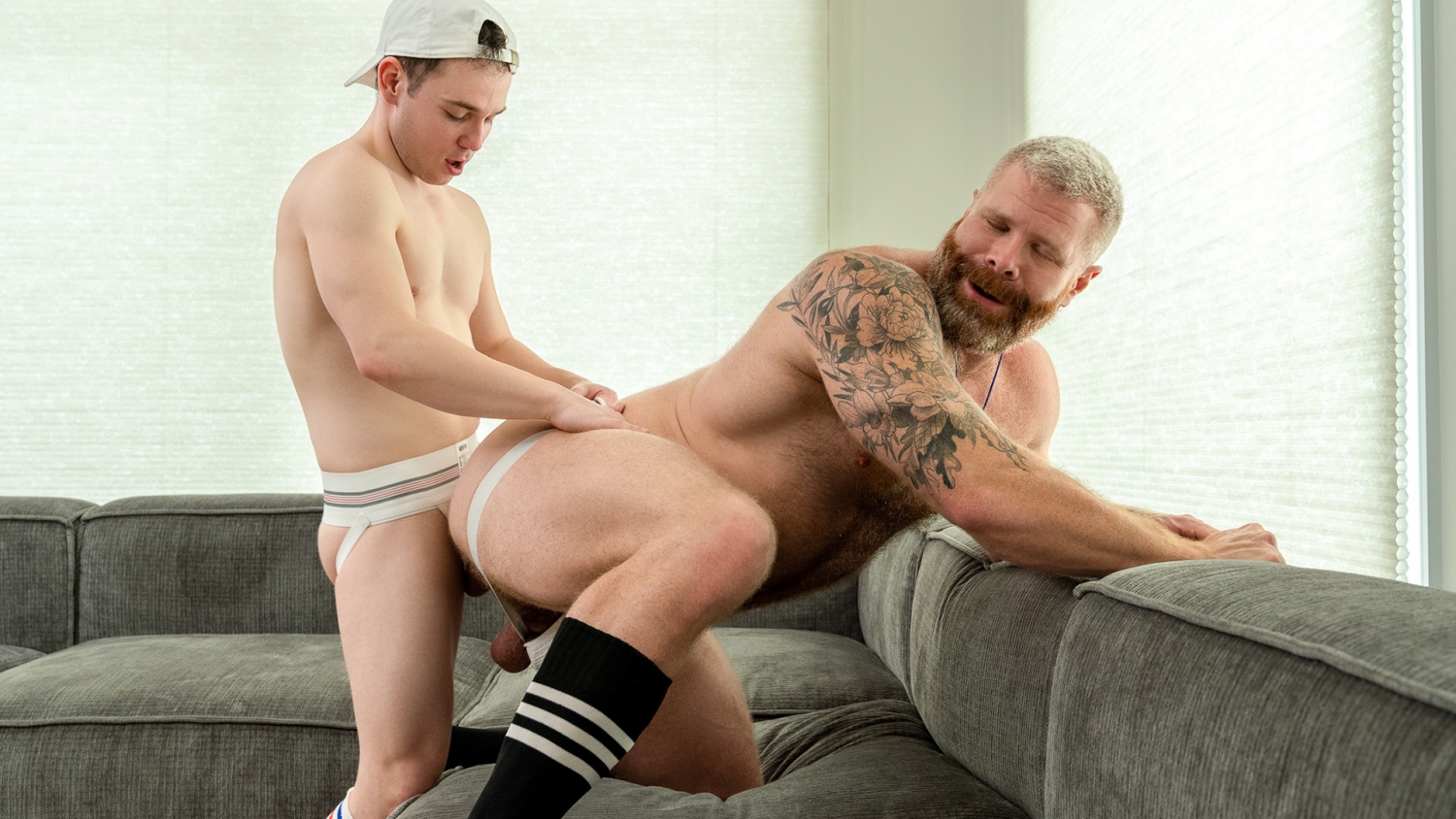 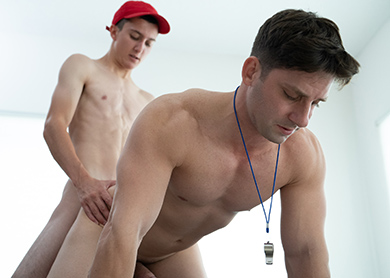 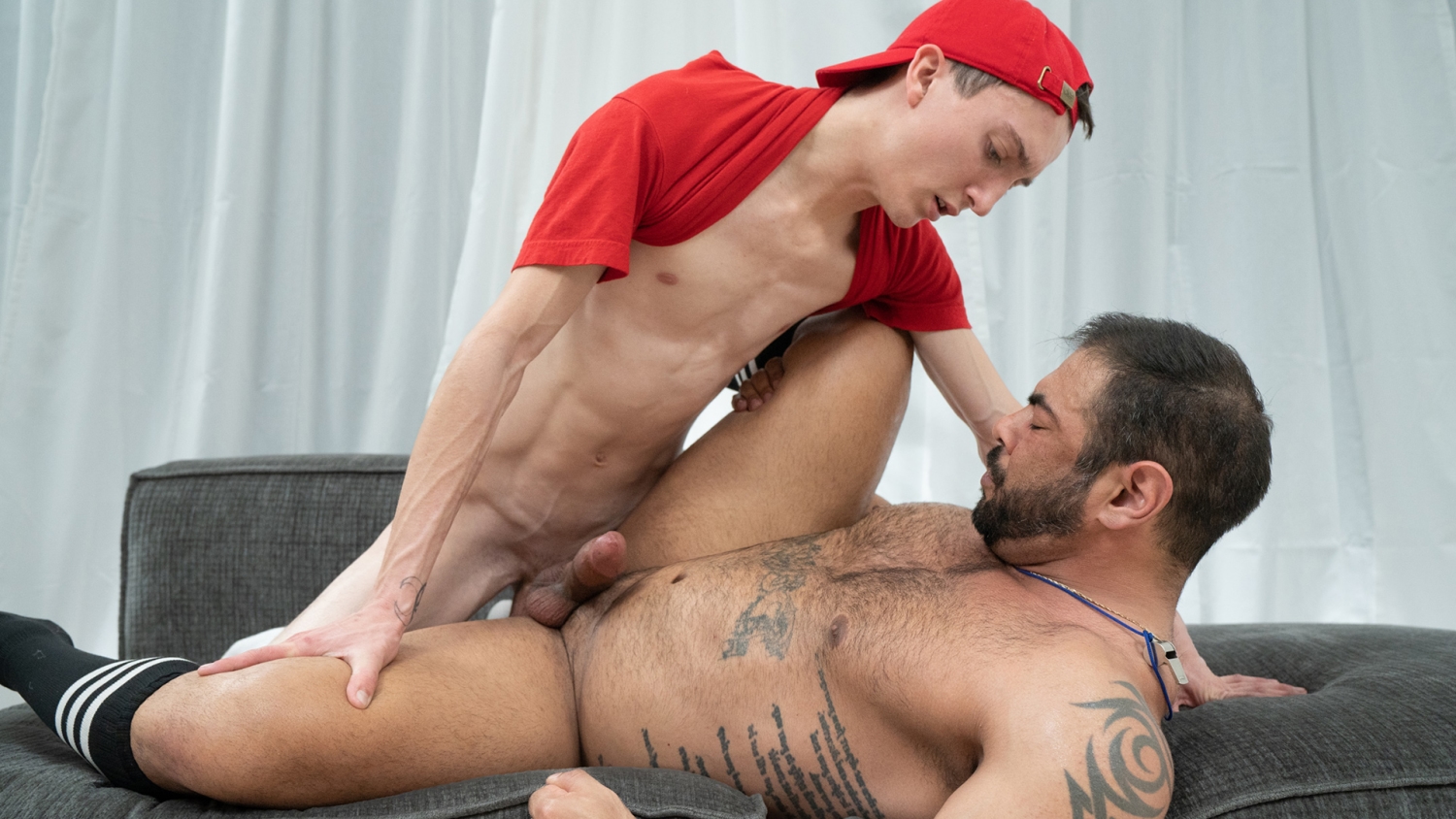